I received a pocket knife for being part of a wedding, one of those types of gifts I felt I needed to write all the uses I have used for so far as it is awesome because:

1.  It is a gift of something I have always wanted but never wanted to buy
2.  It is something to play with, I would compare it to the first time that I bought rope at Lowes, I simply "just played" with it for an afternoon. 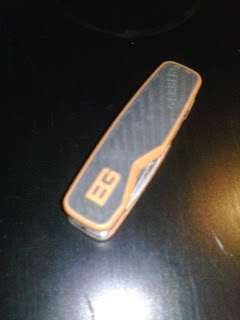 So this blog is devoted to ways that I have already used my new pocket knife and it has only been about a month:

1.  To cut a piece of string off my shirt on my way to work
2.  To cut out a brown spot on my apple that I was eating late afternoon
3.  To put screws in a wall to mount a a fram at work (screwdriver tool)
4.  Cut the tape off the edge of a box I was opening
5.  Most unique use of the week; sink drain stopper was broken and I used the knife to prior it open (hard to explain in words but just believe me I used the knife)
6.  Open a letter I received in the mail
7.  Tried to make my sunglasses tighter with but it wouldn't fit the screw but I tried so it counts as a use

With it only being a month I can already tell the possibilities are endless with this thing!
Thank you Mr. Iroler for the gift!
Next on the list of things that I would more than likely never buy but have always wanted is an umbrella hat!
Posted by Unknown Links to this post